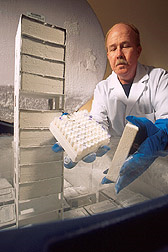 Some protosciences have electronic journals devoted to their efforts. Generally, such efforts are part of an attempt to escape the label "protoscience". Publishing peer-reviewed research is part of how protoscientific efforts join the conventional scientific community. However, it might be possible to create a new Journal of Protoscience that would explore the possibility of scientific publishing in a wiki environment. The mission of such a journal would be something like this:

1) Promote the application of the scientific method to all areas of human interest, exploration and curiosity.

2) Encourage people who are outside of the scientific main-stream to adopt the methods of science such as hypothesis testing and peer-reviewed publication.

3) Make use of modern electronic tools such as wiki websites and blogging as both the medium for publishing new science and communicating that science to the public at large.

New adventures in the primary literatureEdit

If science publishing is going to become totally open and transparent, all phases of the scientific process will need to be open. Grant applications, decisions by funding agencies, laboratory notebooks.....everything.

In the current system, scientists keep secrets in order to compete for funding and cridit for ideas. In an open system, prioriy for ideas will come from the existence of a clear, public, electronically published chain of ideas and work. Ideas should not be kept secret. There should be an open market for ideas such that the best ideas have a chance of reaching the most people as quickly as possible.

Retrieved from "https://protoscience.fandom.com/wiki/Journal_of_Protoscience?oldid=3600"
Community content is available under CC-BY-SA unless otherwise noted.